How your kids can help save half a million lives

Melbourne children can sign up for a sore throat study that researchers hope will help them find a crucial vaccine for a common condition. 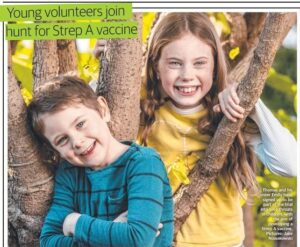 These Melbourne siblings could one day save hundreds of thousands of lives.

Emily, nine, and six-year-old Thomas have signed up for a study into sore throats in children, in a bid to help develop a Strep A vaccine.

Researchers want more than 1000 Melbourne and Perth children to volunteer, so they can learn more about an infection which leads to half a million deaths every year.

Murdoch Children’s Research Institute project lead Andrew Steer said it would be “amazing” to one day produce a vaccine, helped by information gained in this study.

“Understanding sore throat in Victoria and in Perth will be a really important first step in our efforts to eventually develop a vaccine,” he said.

“A vaccine for Strep A will save hundreds of thousands of lives every year and prevent millions of infections that send children and adults to the hospital or doctor.”

Associate Professor Steer said Strep A is the most common bacterial cause of a sore throat, with nearly every child infected at least once, and can be treated with antibiotics.

“But when left untreated it can become life-threatening if the bacteria invades the body’s bloodstream, muscles or lungs,” he said.

“Strep A causes a big burden of disease around the world.”

The one-year study, led by the Murdoch Children’s and Telethon Kids Institutes, involves three visits from the research team and can be done from the comfort of home.

Prof Steer said, following the success of rapid antigen tests, parents will also swab their children’s throat when it feels sore throughout the year and perform a finger prick blood test.

“We’re really excited about this aspect,” he said.

“I think we’re doing things differently than we would have done prior to the pandemic.”

“Sore throat is the most common reason for people getting a prescription for an antibiotic at the general practitioner,” he said.

“To be able to reduce antibiotic prescriptions would take a lot of pressure off of that antibiotic resistance.

“As we all know, antibiotic resistance is a huge issue around the world.”

Mum Barbara Cross said she was motivated to sign Emily and Thomas up for the study after some of their friends were hospitalised with Strep A complications.

“I feel so lucky everyday that at this point in time, my kids are healthy.

“Taking part in this study is a small way we can help others avoid the trauma we saw our friends’ experience.”

Children aged between three and 14-years-old in Melbourne and Perth can sign up for the Australian Step A Vaccine Initiative study at asavi.org.au/get-involved/sore-throat-study/