It had all the hallmarks of a typical winter virus – but this was something far more sinister.

When Perth mum Claire O’Dowd’s son Liam got sick, she thought it was just a typical virus.

But when the seven-year-old’s condition started to rapidly decline, she knew something more serious was at play.

Little Liam’s body was covered in a rash, he had an incredibly high temperature and could not bear weight on his ankle as sepsis was unknowingly spreading through his bloodstream.

O’Dowd says it was missed by two doctors and she wants other parents to be aware to the dangers.

“He was again very hot and he was unresponsive when I went to see him 3am,” she told 7NEWS.

“His eyes were open but he was looking past me.

“I had rung the ambulance nearly straight away.”

O’Dowd recalls the terror she felt in that moment as she knew something was seriously wrong.

“Once we saw a doctor I think they straight away saw there was more to it than just a virus and some temperatures,” she said.

It turned out to be septic arthritis – a potentially fatal painful infection in a joint that is most commonly caused by bacteria and can travel through your bloodstream.

It was caused by Strep A, the same dangerous bacteria Aishwarya Aswath died from while waiting for help at Perth Children’s Hospital.

Liam spent nine days at Perth Children’s Hospital, where he underwent surgery on his ankle.

“I had no idea how serious it would get and how fast it came on,” O’Dowd said.

“I just didn’t even think to look for something more.”

Strep A often begins with a sore throat and can be dismissed or misdiagnosed in the early stages. 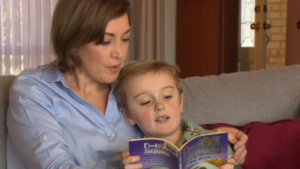 “This is the sort of bug where a child can go to bed perfectly healthy and never wake up – it can kill you within hours.”

There’s no way to prevent it, but now the institute is leading an international push to develop a vaccine.

“I think a vaccine would be quite important especially for a little body to have to go through this much and how fast it happened,” O’Dowd said.

Researchers are also hoping at-home throat swabs and finger prick tests will help them learn more about Strep A.

The two simple tests could revolutionise research and potentially save hundreds of thousands of little lives each year.

“We have been working at this for years and now have it in sight,” Carapetis said.

The institute needs 1000 children to take part in the study.